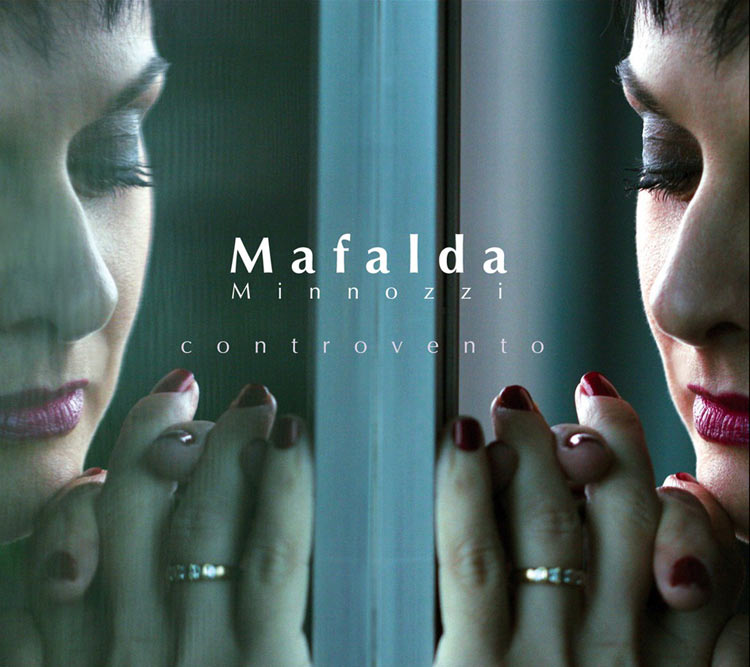 It`s not enough to just sing. It`s necessary to interpret, to feel, and to be swept away by the sounds and lyrics. So that all of the senses of those who hear the song can be completely seduced, those who sing must go beyond. An athletic voice should exhibit all its nuance, going from the most quiet to the most robust high note with authority and attitude. This is the case of the most Brazilian Italian singer that you can find today, Mafalda Minnozzi.

She sings with the body, sings with the heart. This is why it becomes an enormous pleasure to explore the thirteen tracks of the CD “Controvento”. It is an independent production and is the fifth album in the career of the girl who, born in Pavia, Italy, arrived in Brasil for the first time in 1996.

The title of the CD owes itself to the acoustic sounds rather than the tendency towards digital ones, with the use of tube microphones from the 1960s with the intention of capturing the slightest breaths of the singer and preserving the vocal color so that the voice sounds clean and dry with no special effects. Even more significant in the choice of the title is the fact that Mafalda Minnozzi chose composers, although little known in Brazil, who are considered “cult” in Italy for their artistic sentiment enabling the singer to exploit her musical take on these sincere lyrics and music that represent her own way of seeing the world. Among them Mariella Nava, Sérgio Cammariere and Pino Daniele belong to what could be referred to today as the newer Italian popular music. The unorthodox choice of the repertoire settled on originals and songs previously unrecorded by Mafalda with the exception of one, “Prima Dammi Un Bacio” by Lucio Dalla, which appears on the CD “Brasilatinidade” by Martinho da Vila in duet with Mafalda.

Consider also that the protagonist on this CD has chosen musicians dedicated to the love of music to accompany her. From New York`s active studio scene, the saxophonist Aaron Heick (David Letterman, Barbra Striesand) took time off from his world tour with Richard Bona to play on the song “Prima Dammi Un Bacio”. Following her passion for the Uruguayan pianist Hugo Fattoruso, Mafalda recorded three tracks with him in Uruguay (“L’Arcobaleno”, “Dimmi Che Non Vuoi Morire” and “Una Notte in Italia”).

Also from New York came the contribution of guitarist Paul Ricci who performs on practically all of the tracks on the CD. He also, alongside Mafalda, is responsible for most of the arrangements on Controvento. Among the Brazilians, Mafalda invited two great iconic names to participate: maestro Paulo Moura (who played clarinet on “Tutto Quello Che Un Uomo”) and guitarist and composer Guinga (“L`Arcobaleno” and the arrangement on “O Arco-Iris”).

Along with them she added the precious guitar of Marcus Teixeira (“Quando”) and the Grammy winning sound engineer Moogie Canazio (Ivan Lins, Joao Gilberto, Sergio Mendes) recorded and produced all of Mafalda`s vocals.

The CD was completed in NY with the mix by Craig Bishop and Rick DePofi from NY Noise studios and the master was done by Fab DuPont at pureMix NYC. After all of this loving care in the production, the end result couldn`t be more original. Mafalda Minnozzi is as free as ever, singing so powerfully and presenting us with this musical jewel that distances her once and for all from the nickname of “the darling of Rita Pavone” initially bestowed upon her by the Rio de Janeiro journalists in her 1996 debut.