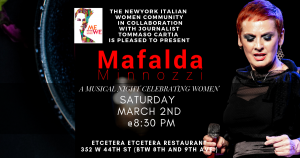 Since forming the “eMPathia Jazz Duo” they have recorded 3 studio CDs, a vast library of online videos and have performed at major Jazz festivals in Europe and Latin America to critical acclaim and standing ovations from enthusiastic crowds. From the American Cole Porter, the Brazilian Jobim, from the French Piaf and Django to the Italian Morricone they integrate a command of so many styles that they not only have studied but also lived. Ricci’s experience mixing both Bossa and blues with jazz in a unique fingerpicking style led Gene Bertoncini to say “from a guitarists’ point of view I`m amazed at the stuff he does harmonically and linearly all by himself”, and NY Times Jazz critic John S. Wilson to write “… guitarist Paul Ricci established a fresh basis for Lover Man with a fascinating unaccompanied guitar solo…”

Mafalda’s style is defined by her charismatic stage presence, vocal range and versatile timbral palette that blurs the line between singer and improviser earning her a prestigious “Targa Tenco” nomination by the Italian press. The result is a truly unique experience that leaves audiences both surprised and emotionally moved. On their return to the Birdland Jazz Club, they were joined by special guest Rogério Boccato on percussion.

They say about them:

“… Ricci brings the harmonic color and Minnozzi the sultriness. Their sound, easy and warm, recalls the faraway beaches that so tempt New Yorkers when the weather turns blustery.”

“… the eMPathia Jazz Duo delivered the hottest show of the night… the Italian singer Mafalda Minnozzi and American guitarist Paul Ricci literally raised the audience with jazzy versions of ” A Felicidade, “Desafinado” as well as other classics such as “Every Time We Say Goodbye” and “Estate”.

“… the jazz component surpasses every other idiom or inspirational source, because Ricci is a jazz guitarist from head to toe and at Mafalda’s side [he] tends to “undress”, to “essentialize” how much she adds with extraordinary interpretive verve… which is vocal but also physical, theatrical… without anything preconceived.”

“… there were some revelations, for example the eMPathia duo composed of Paul Ricci and Mafalda Minnozzi… Fantastic!… with a repertoire of Brazilian and Italian music revisited in Jazz.”

“… overflowing with interpretative choices, communicative appeal and strong artistic personality, the singer expertly handles the dynamics and projection with grace and deep emotional impact, supported by the refined woven comping from the guitarist suggesting a sort of imaginary bridge connecting Italy, the United States and Brazil…”

Some of the duo standards: