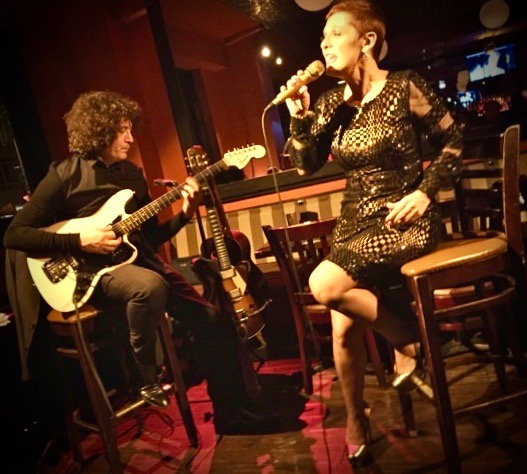 After 25 years moving from Italian stages and TV and later to all of Brazil`s major cities and most major theaters with the ability to cut across a wide range of audiences due to Brazil`s intrinsic love of Italian music, Mafalda Minnozzi has arrived at a point in her career that allows her to fully explore her versatile voice via the many collaborations with, among others, Martinho Da Vila, Guinga, Leny Andrade, Paulo Moura, Leila Pinheiro and Milton Nascimento. In each song she tells a story incorporating not only the sounds of Europe and her native Italy, but also Brazil and New York through her many travels and recordings. In 2015 the time came to unite all of these sounds into one project as the “eMPathia Jazz Duo” with New York guitarist and arranger Paul Ricci resulting in a unique blend of voice and guitar. Ricci`s experience in New York includes performing with Astrud Gilberto, Bobby Sanabria, Mike Clark, Bebel Gilberto, Harry Belafonte, Hugo Fattoruso as well as many noted sidemen in Latin, African, Jazz and Brazilian styles which are all present in the language of this duo. After their 2015 CD “EMPATHIA” which was nominated for the prestigious “Targa Tenco” award in Italy, their second CD “INSIDE” (2016) recorded and produced by noted Grammy winner Jeff Jones will be released on March 21st. Following an extensive concert schedule in 2015 with many festival and concert dates in Italy and Brazil.